This is a quick run down of the steps required for running JVM applications, built using Quarkus and GraalVM, on Render.

Render is a cloud platform for running websites and applications. Like most other comparable services such as fly.io, it offers a decent free tier, which lets you try out the service without any financial commitment. Unlike most other services, with Render, you don’t need to provide a credit card in order to use the free tier. Which means there’s no risk of surprise bills, as often is the case with pay-per-use models, where a malicious actor could DDOS your service and drive up cost for consumed CPU resources or egress bandwidth indefinitely.

If the free tier limits are reached (see Free Plans for details), your services are shut down, until you either upgrade to a paid plan or the next month has started. This makes Render particularly interesting for personal projects and hobbyist use cases, for which you typically don’t have ops staff around who are looking 24/7 at dashboards and budget alerts and could take down the service in case of a DDOS attack.

Render offers a PaaS-like model: when configuring an application, you point Render to a Git repository with your source code, and the platform will build and deploy it after each push to that repo. Unfortunately, Java is not amongst the supported languages right now. But Render also allows you to deploy applications via Docker, so that’s what we’ll use.

As an example project, I have created a very basic Quarkus-based web service. It is generated using code.quarkus.io and contains a single /hello REST endpoint. To make the best use of the resources of the constrained free tier, it is compiled into a native application using GraalVM. That way, it consumes way less memory than when running on the JVM. Feel free to use it for your own experiments.

Render always builds deployed applications from source, i.e. there is no way for deploying a ready-made container image from a registry like Docker Hub. Now we could build our application using Docker on Render, but I have decided against that for two reasons:

So I ended up with the following flow for deploying that Quarkus application on Render: 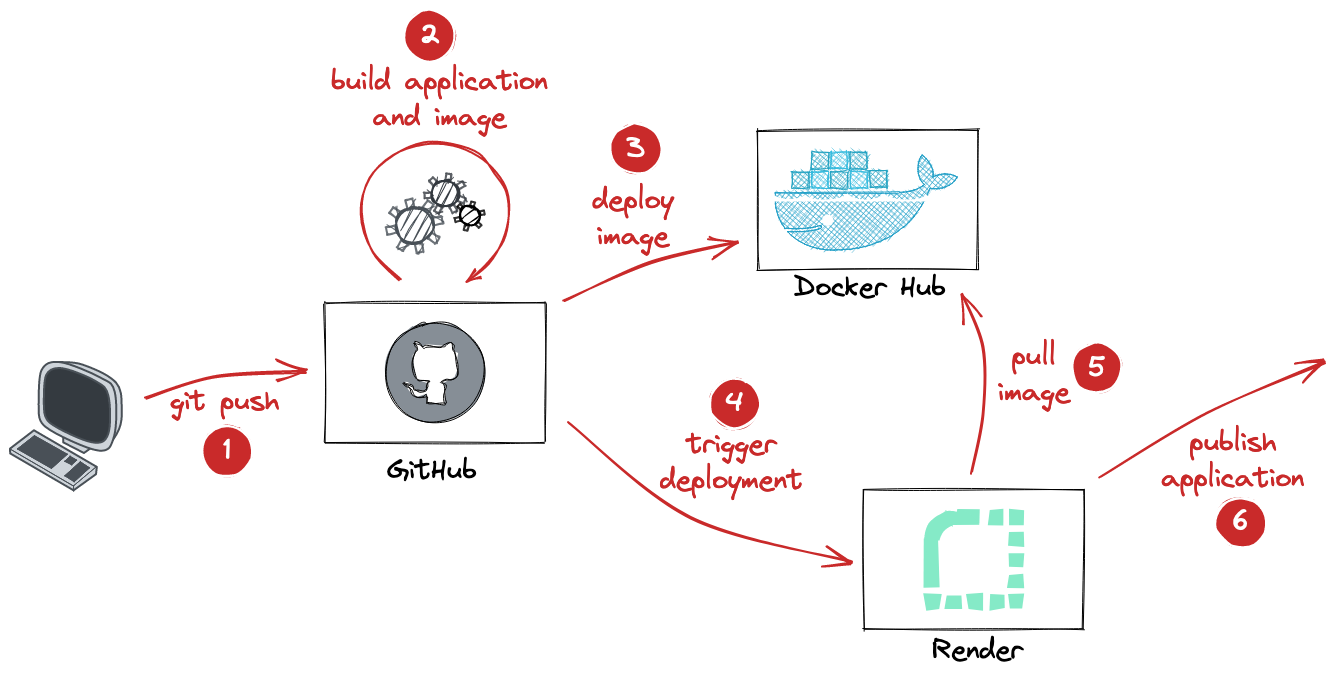 When a commit is pushed to the source repository (1), then a GitHub Action is triggered (2), which builds the application as a native binary, using GraalVM’s native-image tool. The resulting binary is packaged up as a container image, which is deployed to the Docker Hub registry (3). Once the image has been uploaded, a new deployment is triggered on Render (4). The deploy job fetches the container image from Docker Hub and builds the actual image for deployment (5), and finally the service is published to the outside world (6).

Now let’s dive into some specifics of the configuration on Render and GitHub. Once you have signed up for your Render account, go to the main dashboard and click the "New +" button for creating a new "Web Service".

You then have two options: "Connect a repository" and "Public Git repository". The former makes things a bit simpler to use, for instance by configuring all the webhook magic required for a tight integration between GitHub (or GitLab) and Render. It requires more permissions than I’m comfortable with though, one of them being "Act on your behalf". So my recommendation is to go with the second option; it requires some more manual configuration, but it feels a bit safer to me. Specify the URL of your repository and click "Continue": 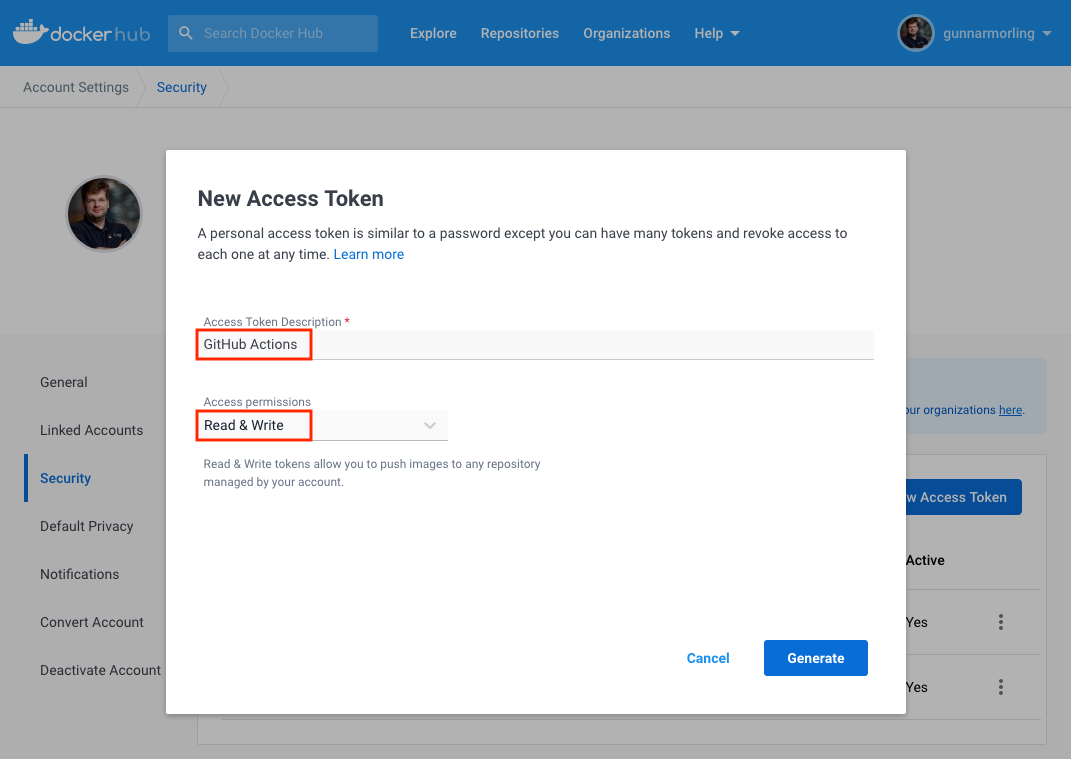 Specify a description for the token and choose "Read & Write" for its access permissions. On the next screen, make sure to copy the generated token, as it will be the only opportunity where you can see it.

The last part of the puzzle is setting up a GitHub Action which builds the application, pushes the container image with the application to Docker Hub and triggers a new deployment on Render. Navigate to your repository, click on the "Settings" tab and choose "Security" → "Secrets" → "Actions". 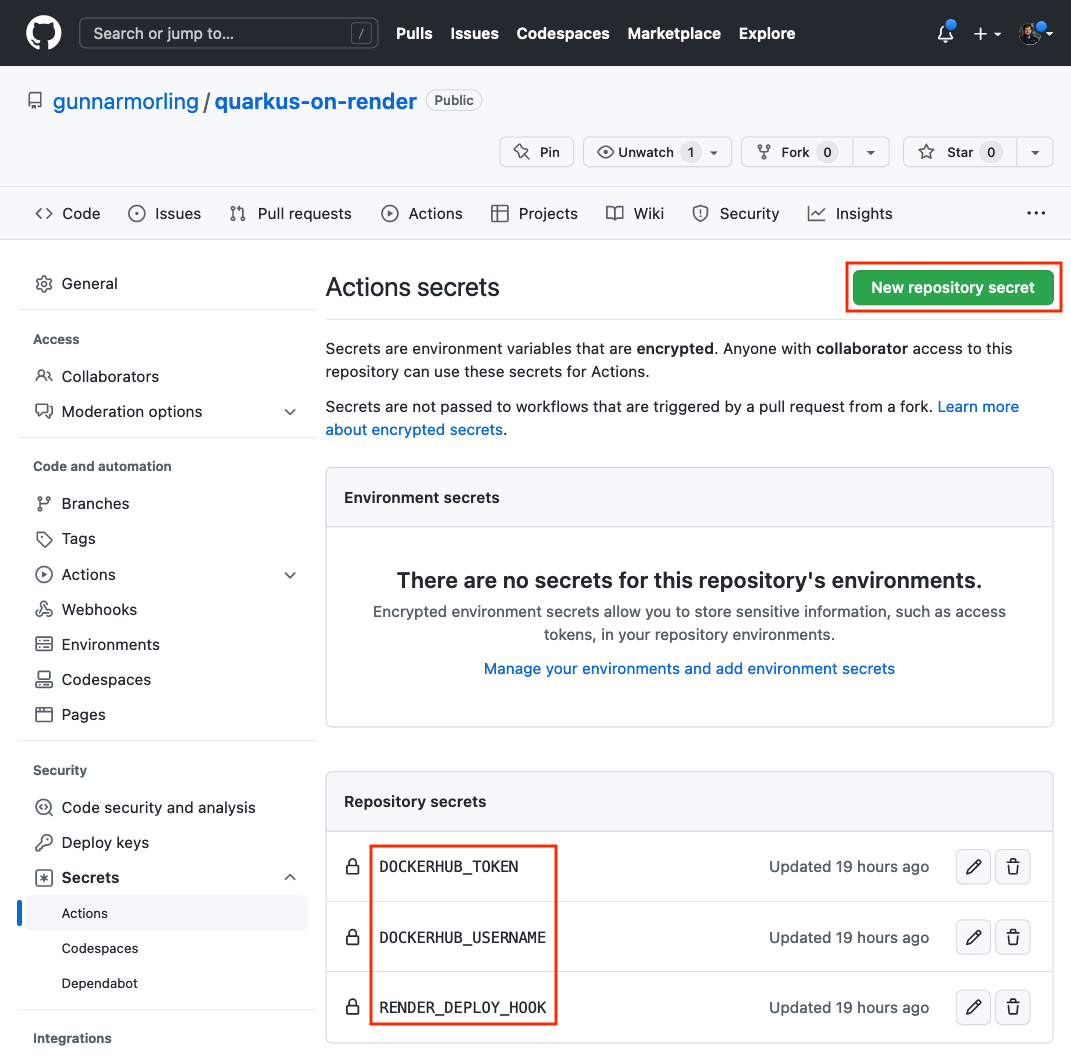 These secrets will be used in the GitHub Action. The Action itself is a big wall of YAML, but most of the things should be fairly self-descriptive:

You can find the original YAML file here in my example repository. In fact, I am quite impressed how powerful GitHub Actions is by means of using ready-made actions for interacting with Docker, setting up GraalVM, invoking HTTP endpoints, and others.

One thing which deserves a special mention is the need for specifying the -H:-UseContainerSupport option when invoking the native-image tool via Quarkus. This is a work-around for GraalVM bug #4757 which triggers an exception upon invocation the method java.lang.Runtime::availableProcessors(). It seems the GraalVM code stumbles upon cgroup paths containing a colon, which apparently is the case in the Docker environment on Render (a similar bug, JDK-8272124, has been fixed in OpenJDK recently).

By disabling the container support when building the application this issue is circumvented, the solution is not ideal though: when determining the number of available processors, any CPU quotas applied for the container will not be considered, but rather the number of cores from the host system will be returned (8 in the case of Render as per a quick test I did). This causes thread pools in the application, like the common fork-join pool, to be sized superfluously large, potentially resulting in performance degredations at runtime. So let’s hope that issue in GraalVM will be fixed soon.

And that’s all there is to it: at this point, you should have all the configuration in place for running a Java application — compiled into a native binary using Quarkus and GraalVM — on the Render cloud platform. Whenever you push a commit to the source repository, a new version of the application will be built, pushed as a container image to Docker Hub, and deployed on Render. The end-to-end execution time for that flow is ca. five minutes, about twice as fast as when building everything on Render itself. To further improve build times, you’d have to invest in beefier build machines; while compilation times with GraalVM have improved quite a bit over the last few years, it’s still a rather time-consuming experience.

Check out my repository on GitHub for the complete source code of the example application, with GitHub Actions definition, Maven POM file, etc.