If you have followed this blog for a while, you’ll know that I am a big fan of JDK Flight Recorder (JFR), the low-overhead diagnostics and profiling framework built into the HotSpot Java virtual machine. And indeed, until recently, this meant only HotSpot: Folks compiling their Java applications into GraalVM native binaries could not benefit from all the JFR goodness so far.

But luckily, this situation has changed with GraalVM 21.2: Thanks to a collaboration of engineers from Red Hat and Oracle, GraalVM native binaries now also support JDK Flight Recorder. At this point, the JFR recording engine itself has been put in place, there are not many event types actually emitted yet. As Jie Kang wrote recently in a post about this ongoing work, this should change soon, though:

The initial merge for JFR infrastructure is complete but there is a long road ahead before the system can provide a view into native executables produced by GraalVM that is similar to what is possible for HotSpot. Up next is the work to add events for garbage collection, threads, exceptions, and other useful locations in SubstrateVM.

What already does work is emitting custom JFR events from your application code. So I took the Quarkus-based todo management application from my earlier post about monitoring REST APIs with JFR and explored what it’d take to make it work as a native binary. And what should I say, essentially things "just worked ™️". All I had to do, was the following:

As per the GraalVM documentation, the latter is required in order to use JFR events in native binaries. Unfortunately, failing to do so will only be reported at application runtime with an exception like this:

This is triggered by the application code registering the custom JFR event type:

Here I’d wish that either GraalVM’s native-image tool or Quarkus would tell me about this situation already upon build time, in particular as the cause of that problem is not readily apparent from the exception above. In any case, the required fix is simple enough, all we need to do is to set the quarkus.native.enable-vm-inspection option in the application.properties file of the Quarkus application:

With that configuration in place, the application can be built as a native binary via mvn clean verify -Pnative. Grab a coffee while the build is running (it takes about two minutes on my laptop), and then you can start the resulting native binary with the following options for creating a JFR recording:

You can also configure some more of the known JFR options, such as maximum recording size and duration. What is not possible at this point is starting recordings dynamically at runtime e.g. via jcmd or JDK Mission Control, as the JMX-based infrastructure required for this isn’t present in native binaries (I haven’t tried to do so programmatically from within the application itself, this may be supported already). JFR Event Streaming (as introduced with JEP 349 in Java 14) also doesn’t work yet.

After creating some todos in the web application, we can open the JFR recording in JDK Mission Control and examine the JFR events emitted for each invocation of the REST API: 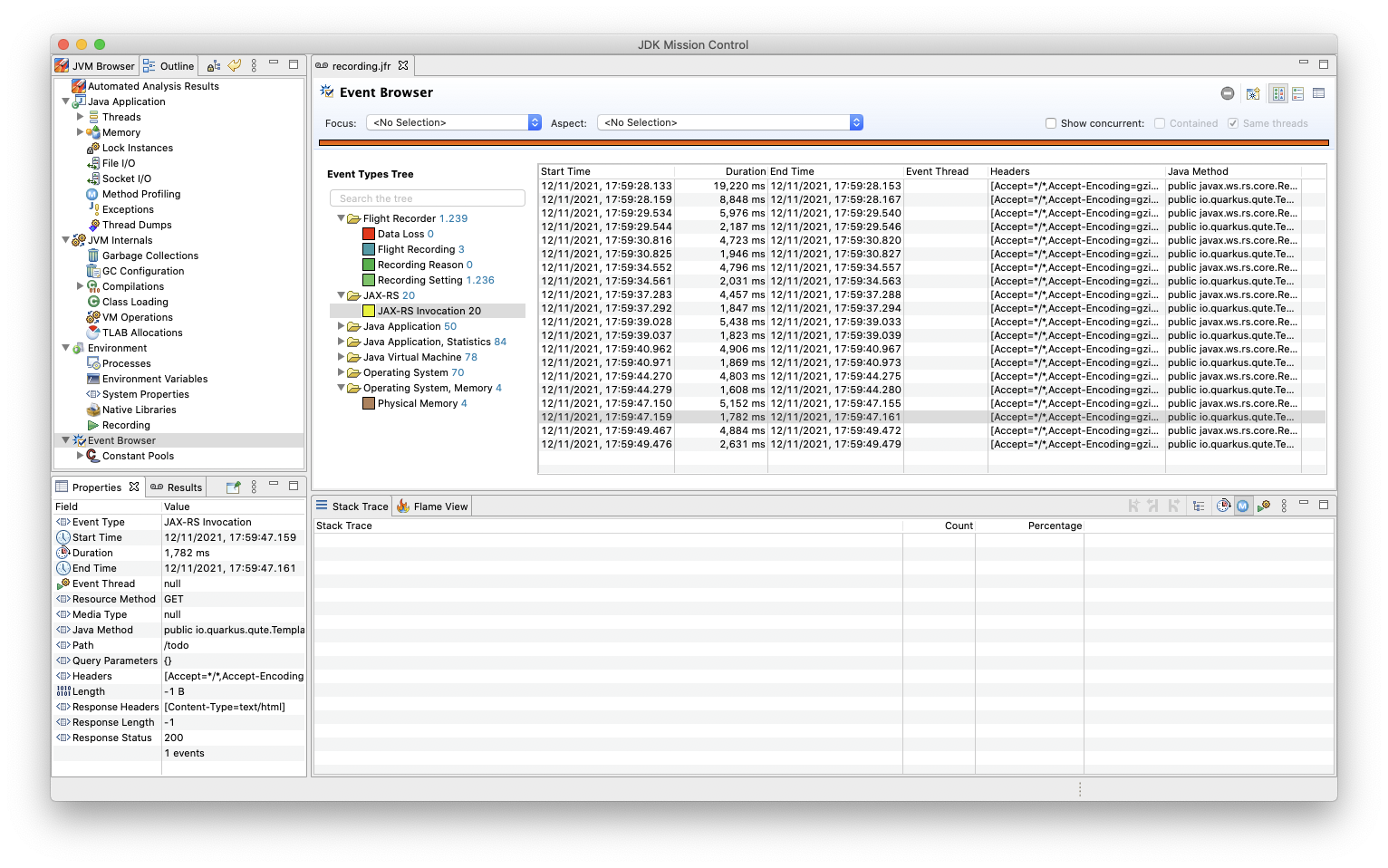 As you see, besides the custom REST invocation events and some system events representing environment variables and system properties, the recording is rather empty. Also note how the thread attribute of the custom event type isn’t populated.

I’ve updated the jfr-custom-events repository on GitHub, so you can get started with your own explorations around JFR events in GraalVM native binaries easily. Just make sure to have a current GraalVM and its native-image tool installed. The initial feature request for adding JFR support to GraalVM native binaries provides some more background information. You also can use JFR with the Mandrel distribution of GraalVM.

To learn more about JFR in general, have a look at this post by Mario Torre. Finally, if you’d like to find out how to use JFR for identifying potential performance regressions in your Java applications, check out this talk about JfrUnit which I did at the P99Conf conference a few weeks ago.