Ahead-of-time compilation (AOT) is the big topic in the Java ecosystem lately: by compiling Java code to native binaries, developers and users benefit from vastly improved start-up times and reduced memory usage. The GraalVM project made huge progress towards AOT-compiled Java applications, and Project Leyden promises to standardize AOT in a future version of the Java platform.

This makes it easy to miss out on significant performance improvements which have been made on the JVM in recent Java versions, in particular when it comes to faster start-up times. Besides a range of improvements related to class loading, linking and bytecode verification, substantial work has been done around class data sharing (CDS). Faster start-ups are beneficial in many ways: shorter turnaround times during development, quicker time-to-first-response for users in coldstart scenarios, cost savings when billed by CPU time in the cloud.

With CDS, class metadata is persisted in an archive file, which during subsequent application starts is mapped into memory. This is faster than loading the actual class files, resulting in reduced start-up times. When starting multiple JVM processes on the same host, read-only archives of class metadata can also be shared between the VMs, so that less memory is consumed overall.

Originally a partially commercial feature of the Oracle JDK, CDS was completely open-sourced in JDK 10 and got incrementally improved since then in a series of Java improvement proposals:

In the remainder of this blog post we’ll discuss how to automatically create AppCDS archives as part of your (Maven) project build, based on the improvements made with JEP 350. I.e. Java 13 or later is a prerequisite for this. To learn more about using CDS with the current LTS release JDK 11 and about CDS in general, refer to the excellent blog post on everything CDS by Nicolai Parlog.

At first let’s see what’s needed to manually create and use an AppCDS archive (note I’m going to use "AppCDS" and "CDS" somewhat interchangeably for the sake of brevity). Subsequently, we’ll discuss how the task can be automated in a Maven project build.

To have an example to work with which goes beyond a plain "Hello World", I’ve created a small web application for managing personal to-dos, using the Quarkus stack. If you’d like to follow along, clone the repo and build the project:

The application uses a Postgres database for persisting the to-dos; fire it up via Docker:

The next step is to run the application and create the CDS archive file. Do so by passing the -XX:ArchiveClassesAtExit option:

Only loaded classes will be added to the archive. As classloading on the JVM happens lazily, you must invoke some functionality in your application in order to cause all the relevant classes to be loaded. For that to happen, open the application’s API endpoint in a browser or invoke it via curl, httpie or similar:

Stop the application by hitting Ctrl+C. This will create the CDS archive under target/app-cds.jsa. In our case it should have a size of about 41 MB. Also observe the log messages about classes which were skipped from archiving:

Mostly this is about hidden or anonymous classes which cannot be archived; there’s not so much you can do about that (apart from using less Lambda expressions perhaps…​).

It’s thus a good idea to check whether you can upgrade to newer versions of your dependencies, as this may result in more classes becoming available for CDS, resulting in better start-up times in turn.

When examining the classload.log file, you should see how most class metadata is obtained from the CDS archive ("source: shared object file"), while some classes such as the ancient Antlr classes are loaded just as usual from the corresponding JAR:

Note it is vital that the exact same Java version is used as when creating the archive, otherwise an error will be raised. Unfortunately, this also means that AppCDS archives cannot be built cross-platform. This would be very useful, e.g. when building a Java application on macOS or Windows, which should be packaged in a Linux container. If you are aware of a way for doing so, please let me know in the comments below.

Manually creating a CDS archive is not very efficient nor reliable, so let’s see how the task can be automated as part of your project build. The following shows the required configuration when using Apache Maven, but of course the same approach could be implemented with Gradle or any other build system.

The basic idea is the follow the same steps as before, but executed as part of the Maven build:

Steps 1. and 3. can be automated with help of the Process-Exec Maven plug-in, binding it to the pre-integration-test and post-integration-test build phases, respectively. While I was thinking of using the more widely known Exec plug-in initially, this turned out to not be viable as there’s no way for stopping any forked process in a later build phase.

What remains to be done is the automation of step 2, the invocation of the required application logic so to trigger the loading of all relevant classes. This can be done with help of the Maven Surefire plug-in. A simple "integration test" via REST Assured does the trick:

We just need to configure a specific execution of the plug-in, which only picks up any test classes whose names end with *AppCds.java, so to keep them apart from actual integration tests:

And that’s all we need; when now building the project via mvn clean verify, a CDS archive will be created at target/app-cds.jsa. You can find the complete example project and steps for building/running it on GitHub.

What Do You Gain?

Creating a CDS archive is nice, but is it also worth the effort? In order to answer this question, I’ve done some measurements of the "time-to-first-response" metric, following the Quarkus guide on measuring performance. I.e. instead of awaiting some rather meaningless "start-up complete" status, which could arbitrarily be tweaked by means of lazy initialization, this measures the time until the application is actually ready to handle the first incoming request after start-up.

Here are the numbers, averaged over ten runs each: 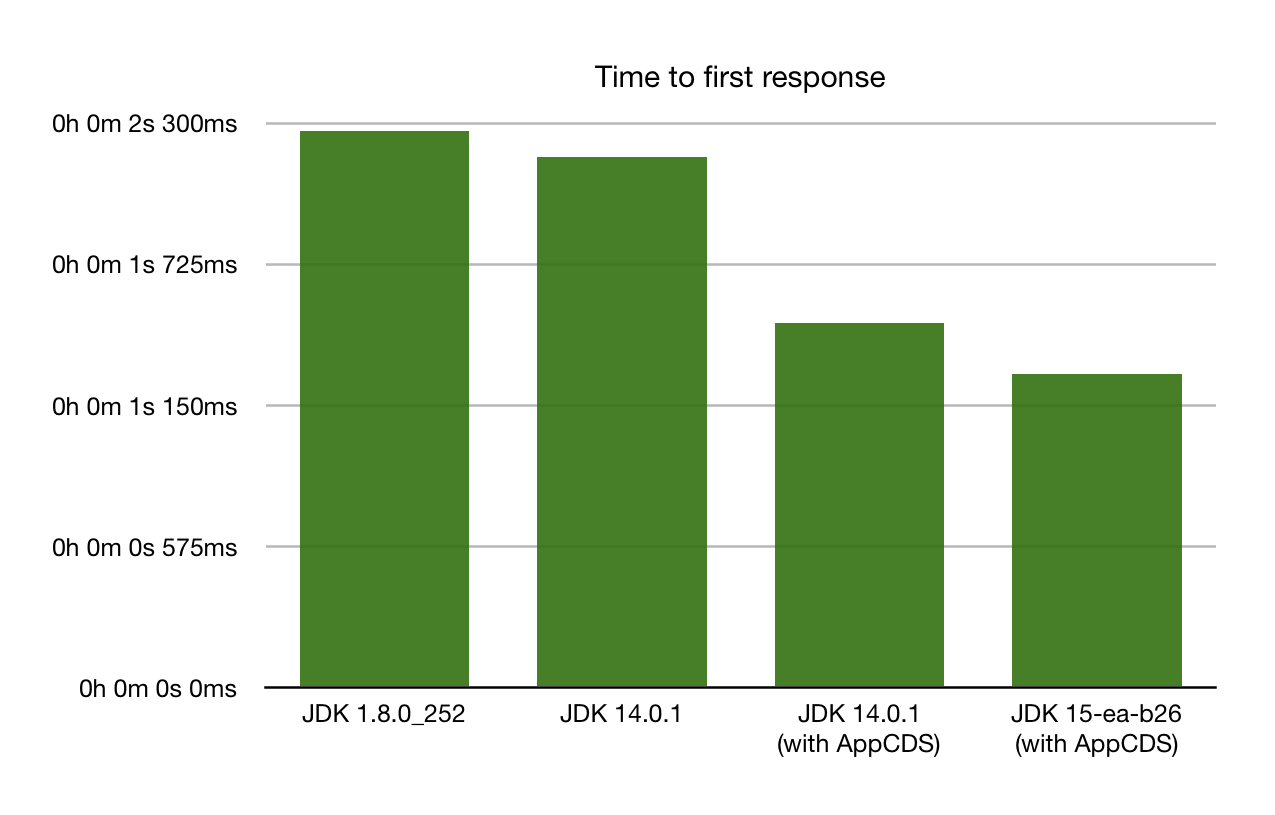 Update, June 12th: I had originally classload logging enabled for the OpenJDK 14 AppCDS runs, which added an unneccessary overhead (thanks a lot to Claes Redestad for pointing this out!). The numbers and chart have been updated accordingly. I’ve also added numbers for OpenJDK 15-ea.

With OpenJDK 15 things will further improve. The latest EA build at the time of writing (b26) shortens time-to-first-response by another ~200ms. The upcoming EA build 27 should bring another improvement, as Lambda proxy classes will be added to AppCDS archives then.

That all is definitely a nice improvement, in particular as we get it essentially for free, without any changes to the actual application itself. You should contrast this with the additional size of the application distribution, though. E.g. when obtaining the application as a container image from a remote container registry, downloading the additional ~40 MB might take longer than the time saved during application start-up. Typically, this will only affect the first start-up of on a particular node, though, after which the image will be cached locally.

As always when it comes to any kinds of performance numbers, please take these numbers with a grain of salt, do your own measurements, using your own applications and in your own environment.

AppCDS provides Java developers with a useful tool for reducing start-up times of their applications, without requiring any code changes. For the example discussed, we could observe an improvement of the time-to-first-response metric by about 30% when running with OpenJDK 14. Other users reported even bigger improvements.

We didn’t discuss any potential memory improvements due to CDS when sharing class metadata between multiple JVMs on one host. In containerized server applications, with each JVM being packaged in its own container image, this won’t play a role. It could make a difference on desktop systems, though. For instance multiple instances of the Java language server, as leveraged by VSCode and other editors, could benefit from that.

That all being said, when raw start-up time is your primary concern, e.g. in a serverless or Function-based setting, you should look at AOT compilation with GraalVM (or Project Leyden in the future). This will bring down start-up times to a completely different level; for example the todo manager application would return a first response within a few 10s of milliseconds when executed as a native image via GraalVM.

But AOT is not always an option, nor does it always make sense: the JVM may offer a better latency than native binaries, external dependencies migh not be ready for usage in AOT-compiled native images yet, or you simply might want to be able to benefit from all the JVM goodness, like familiar debugging tools, the JDK Flight Recorder, or JMX. In that case, CDS can give you a nice start-up time improvement, solely by means of adding a few steps to your build process.

Besides class data sharing in OpenJDK, there are some other related techniques for improving start-up times which are worth exploring:

To learn more about AppCDS, a long yet insightful post is this one by Vladimir Plizga. Volker Simonis did another interesting write-up. Also take a look at the CDS documentation in the reference docs of the java command.

Lastly, the Quarkus team is working on out-of-the-box support for CDS archives. This could fully automate the creation of an archive for all required classes without any further configuration, making it even easier to benefit from the start-up time improvements promised by CDS.